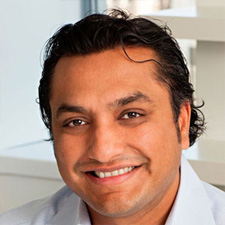 Rishi Nangalia is a Managing Director and the Global Head of ETI Trading at Thomson Reuters, developing and managing the firms buy-side execution strategy, including the REDI and Autex .

Rishi joined Thomson Reuters when the firm acquired REDI, an award-winning broker-neutral execution management system, in January 2017. He served as the CEO of REDI, the financial technology consortium that he conceived and spun out from Goldman Sachs in 2013 and which was owned by six industry institutions.  Under Rishi’s leadership, the firm achieved its strategic objective in making REDI an integral part of capital markets.  His team at REDI built a company that bridged the expertise of Wall Street with the innovation of a start-up, providing superior trading technology to institutional traders. REDI then acquired InstaQuote, a peer firm owned by Bank of America, and consolidated competitor Knight Direct in its three-and-a-half-year journey as an independent company.

In addition to his full-time job, Rishi is very active in the start-up community, investing, advising and (at times) incubating new concepts.  Like many angel investors, he started by investing in people who were committed to changing the world, participating vicariously. Starting with a friend’s spa venture in 2006, Rishi’s portfolio has expanded over the past few years to include indie movie projects, innovative consumer finance, a farm-to-table restaurant chain, consumer electronics recycling, an RIA management platform, a fantasy sports trading platform, a custom clothing manufacturer, a parent social sharing platform, a parents-coaches matching marketplace, real estate ventures and more. He is currently incubating a real-time employee performance review system which is now in beta.

Prior to REDI, Rishi managed business development and strategic investments for electronic trading at Goldman Sachs.  In his 13 years with the firm, he built an electronic trading business that grew from $150mm in 2001 to a nearly a billion-dollar global business spanning across equities and derivatives. Additionally, he built trading platforms, algorithms, smart order routers and the industry leading dark-pool, SIGMA X.  Rishi also managed investments in many strategic companies and served as a board member on successful investments such as DirectEdge Exchange, Pico Quant Trading, BIDS ATS and FTEN Technologies.  He was promoted to Vice President in 2004 and Managing Director in 2007.

Prior to joining Goldman Sachs, Rishi co-founded an e-trading startup in Asia modeled after E*TRADE in the US.  He began his career in real estate, first as a project manager at a development company and later as a research associate covering REITs at CIBC World Markets.

Rishi earned an M.B.A in Finance & Entrepreneurship from Columbia Business School, an M.S. in Real Estate Development from Columbia University and a B.B.A. from St. Xavier’s College in India.